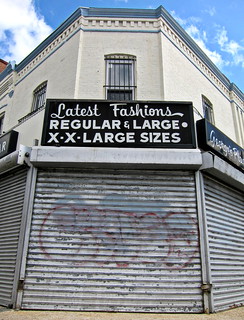 The former retail store George’s Place, a big-and-tall men’s shop, located at 1001 H Street NE in the Near Northeast neighborhood (H Street corridor) of Washington, D.C. From The Washington Post: "George Butler, the man who owned the place since right after the 1968 riots that devastated much of the H Street NE and U

The former retail store George’s Place, a big-and-tall men’s shop, located at 1001 H Street NE in the Near Northeast neighborhood (H Street corridor) of Washington, D.C. From The Washington Post: "George Butler, the man who owned the place since right after the 1968 riots that devastated much of the H Street NE and U Street NW corridors, put it up for sale in 2011. With its corner plot and massive bay windows, it’s a great location." The building was purchased by Ben Ali’s family with plans to open another Ben’s Chili Bowl restaurant. To the surprise of many locals, instead of renovating the property the building was torn down in October of this year. According to Nizam Ali, it was a safety issue.

The building was reportedly erected in 1908, but I’ve found references to this address as far back as 1898. It certainly looks to be late 19th century architecture. Here’s a few things I found:

A man by the name of James O. Phelps operated a dry goods business at this address in the 1890s. He died in 1906 and there was a real estate transfer of this property and the adjoining address (1003) the following year. Also in 1908 The Washington Times reported: "L. Richold has sold the property located at 1001 and 1003 H street northeast to Israel S. Miller. The property has a frontage of thirty feet by seventy-five feet and is occupied by a store and flats. The consideration was about $9,000. The property was bought as an investment." From 1913 to the early 1920s, it was the Syndicate Department Store, operated by Julius E. Scheer. In 1920, the store included three addresses, 1001, 1003, and 1005 H Street NE. (here’s a newspaper ad announcing the expanded space) Scheer lived with his family above the store; well, most of his family did at least. From a 1920 article in The Washington Herald: "Mrs. Frances Scheer, wife of Julius Scheer, a clothing merchant of 1001 H street northeast, was ordered by Justice Gould of the District Supreme Court yesterday to appear on September 24 and show cause why she should not be restrained from nagging her husband and attempting to ruin his business. Scheer, through Attorney Alvin L. Newmyer, filed suit for a limited divorce charging cruelty and made a special request to the court that pending the settlement of the suit, his wife be compelled to let him alone and stay out of his store." Two years later, the Herald reported what I imagine to be happy news for the Scheer family: "Dr. Adler Shefferman, rabbi of Adath Israel Temple, privately married Albert Scheer, 1001 H street northeast, and Miss Rose Hehraman, of Philadelphia, at his home, Tuesday night at 8 o’clock. They were unattended. The bride wore a blue coat suit and carried a bouquet of sweetheart roses and lilies of the valley. Upon their return from a trip to Philadelphia, and Atlantic City they will reside in this city. The bridegroom is a manager for the Syndicate Department Stores Company." From 1926-1927 local real estate developer Harry Wardman was a distributor for Overland (later Willys-Knight) automobiles and used the building as a sales and service branch. I don’t know what the building served as the next few decades, but I do know Tops Furniture Co., Inc., was located there in 1969. According to the article mentioned earlier, I assume George’s Place men’s shop opened not long after that.

LOL! Fascinating history, Josh. Hopefully, Albert and Rose were very happy in the end. Great shot of the building, too!

For the big girls…Pre Lane Bryant?