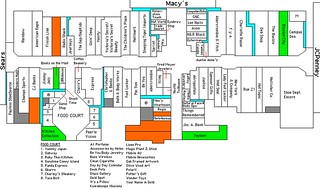 Click full size for best results. My second mall-history map. Orange spaces are vacant, and green ones are temporary Christmas tenants. These are all the former stores I remember: *Between Finish Line and RadioShack was Suncoast. This was later Vanity for a short time, then Goldman’s (one of those cash for gold places). *Journeys was

My second mall-history map. Orange spaces are vacant, and green ones are temporary Christmas tenants.

These are all the former stores I remember:

*Between Finish Line and RadioShack was Suncoast. This was later Vanity for a short time, then Goldman’s (one of those cash for gold places).
*Journeys was Franklin Covey. Before that, I seem to remember some sort of toy store that may have been seasonal.
*Goin’ Deep was Wilson’s Leather.
*Vanity was Weathervane, then an H&R Block office, then the first location for Journeys.
*The right half of Victoria’s Secret was The Limited.
*Sleeping Tiger was Disney Store.
*Sprint was Sibley Shoes, then Underground Station.
*Eyebrow Stop was "Boxes & Bears", then Be You.
*Relaxation was two storefronts: Auto Telephone & Paging and Heavenly Ham. It was later the first location for Computers to Go.
*Macy’s was Hudson’s from 1976-2001, then Marshall Field’s from 2001-2006.
*Computers to Go’s current location was Ritz Camera.
*Avon was Deck the Walls.
*H&R Block was Select Comfort. I think it was Tape World before that; I know Tape World was somewhere in the Macy’s wing.
*Yankee Candle was Naturalizer Shoes.
*Auntie Anne’s was Fanny Farmer.
*f.y.e. was FootAction USA, then a dollar store.
*Charlotte Russe took two spaces. One (closer to f.y.e.) was Leather Limited and the other was Rave.
*Blanket City was Lane Bryant, which moved to a strip mall.
*Campus Den’s current location was Shoe Department.
*Shoe Department Encore was originally Heavenrich’s when the mall opened. Dunham’s Sports later took over most of the Heavenrich’s space, leaving three smaller stores up front. If I remember correctly, the smaller stores were last occupied by Icing, Select Comfort and LeRoy’s Jewelers. Later on, Steve & Barry’s took the entirety of the old Dunham’s and the three smaller spaces.
*Hot Topic was Mr. Rags.
*Rue 21 was Waldenbooks/Waldenkids, which was an original tenant.
*New York & Company was f.y.e. by way of Camelot Music. I think Camelot used to be larger; it seems it once extended into the Lady Foot Locker space.
*Justice was Limited Too.
*I think this mall’s Aéropostale may have been a County Seat as well.
*LeRoy Jewelers and Media Replay were Carlton Cards, which was an original tenant by way of American Greetings.
*Jos. A. Bank was Golf Shop, and I think Pearle Vision (NuVision?) before that.
*Toyzam was Talbot’s.
*Across from Talbot’s was Ruby Tuesday, which closed ca. 2006. It was later a short-lived (November 18, 2008-May 10, 2009) Garfield’s, and is currently slated to become Willow Tree.
*The space right above it was KB Toys, and later another dollar store. I think there was once a CVS somewhere in this area.
*The space between Regis and Merle Norman was After Hours Tuxedo.
*Men’s Wearhouse & Tux took two spaces: Aladdin’s Castle and Hot Sam Pretzels.
*Nestlé Tollhouse was a Mrs. Fields/Pretzel Time, and Great American Cookie before that.
*Icing was 5-7-9 and then a one-off called Fashions Unlimited.
*Be You was Gadzooks and then Sports Vault.
*The lower half of Claire’s used to be Alfano’s Stride Rite.
*The entire food court area (as well as the back of Express, the GameStop, restrooms and the Alfano’s space) was originally Weichmann’s Department Store, which closed in 1992.
*Charley’s Steakery was Great Steak & Potato.
*Kitchen Collection was Sam Goody, then a couple other temporary tenants, then a Tilt! arcade.
*Sunshine Coney was McDonald’s.
*Ruby Thai was Bourbon Street Chicken.
*Subway was previously another restaurant, but I can’t remember what it was.
*Yummy Japan was some other Japanese restaurant, I think.
*GameStop was Software Etc. (amazingly, until as recently as 2009) and I think it was Waldensoftware before that.
*Snack Time was Golden Twirl Ice Cream, then Sugar Daddy’s.
*JB Robinson’s current spot was San Francisco Music Box Company.
*Books on the Mall was the first location for JB Robinson, then a Nextel dealer.
*Jimmy Jazz was originally two storefronts. One was a gift shop, and one was Northern Reflections, then another gift shop. Later, both spaces became d.e.m.o. for a short time, followed by Campus Den.
*CJ Banks was Eddie Bauer.
*I think Payless and Modern Nails are in the old York Steak House, but I’m not certain.

Still not sure on a few others, like the Natural Face & Body Spa, the Jos. A. Bank and Express locations.